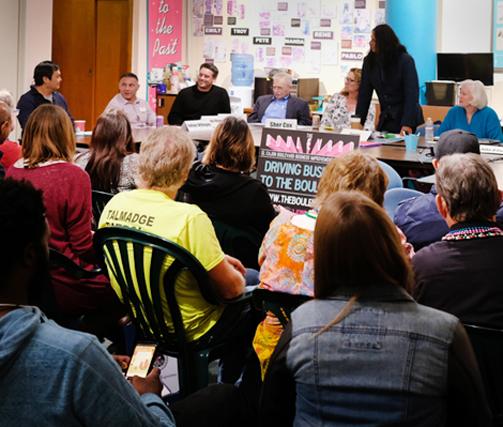 A presentation on BLVD 20/20 was the main focus of the meeting.

This vision for smart living, working and growing into San Diego’s model transit-oriented community is building on decades of effort by The El Cajon Boulevard Business Improvement Association, its member businesses, residents and countless community and government partners.

The vision, which will be implemented through our hub strategy, is guided by a set of principles rooting The Boulevard as the spine of the community. It connects the surrounding neighborhoods and provides the capacity for connectivity, density and economic vitality.

ABC 10 and NBC 7 were both present covering the meeting. ﻿

Mary Lydon, a longtime ECBBIA friend and collaborator, was presented with an award by Assemblymember Todd Gloria.

John Royal from the Talmadge Patrol was given an award for all his work in the East End Hub.

Board of Directors Election

Board elections were also held as part of the Annual Meeting. Gustavo Alvarado (Black Stag), Kristen Karhio (KOR), Domingo Garcia (Su Pan), and Lili Klu (LK Fashions) were all elected to serve as new members on the board. All are business owners who have already been actively involved with the ECBBIA and the community at large.