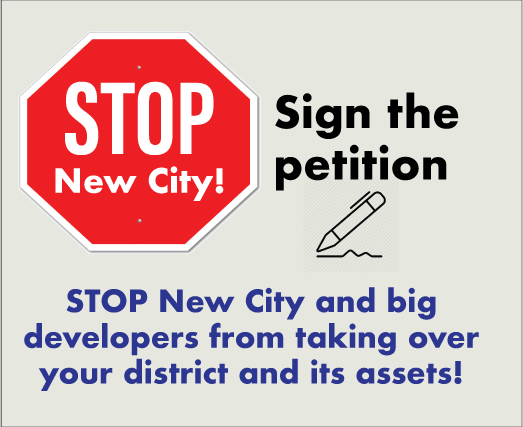 STOP New City and big developers from taking over your district and its assets!

In order to enlist support for new districts such as this, New City America promises prospective property owners that they will see their communities undergo a similar transformation that has occurred in Little Italy. They misinform folks that Little Italy redevelopment was primarily due to the formation of a MAD rather than due to California Redevelopment Law and the efforts of CCDC (now Civic San Diego). New City America has never been able to replicate the success that has occurred in Little Italy in the 60 or so districts that they have been paid to form.

Initially New City America sent unsolicited surveys to area property owners. A second mailing was needed due to limited support on the first round. We were apprised of New City’s intentions and the low interest in this survey from a local developer. New City did not notify any of the local community organizations as intended by the sponsoring development company and the District 3 City Council representative. This shows a lack of respect to existing organizations, who for decades, have been working diligently and successfully at improving the area. The surveys distributed are misleading in that they don’t inform potential assessees that the fee for service for New City America to form such a district is approximately $75,000 and would be paid by assessed property owners from the first few years of annual collections, a loan that one way or the other will be repaid. Furthermore, the survey describes a new management corporation which is again a private profit-making venture for New City America, which has no ties to the area and would leach away over $200,000 in the first three years and an unspecified amount in the years to come. The $80,000 a year for an extra layer of administration can be better spent by businesses and property owners.

If property owners in this area want increased maintenance or marketing services, existing community-based nonprofits could use existing procedures to adjust services and fees without duplicating overhead. The perception of the need for additional services is being created by a private company desiring to land a contract for services.  Branding in The West End was begun by the ECBBIA over 20 years ago as a business hub in coordination with business and property owners without extra charge. This included the The Boulevard sign, construction of landscaped medians, ornamental lighting and hundreds of trees.  The Hillcrest Business Association has also put countless hours and resources into developing the Normal Street Promenade, which now includes the iconic flag and median, and plans for future improvements. Park Blvd. is shared by 3 Community groups who have advocated for Transit Oriented Development and improved bus service that benefits the area and connecting neighborhoods.

Since the vote is weighted, a small group of large property owners will have a disproportionate impact on the establishment of a new district. The negligence of the opportunistic management company puts an undue burden on smaller property owners who are busy tending to their businesses and are not actively involved and made aware of the nature of the proposed for-profit entity and double assessment that would be levied on them. This increase would likely be passed on from property owners to residential and business tenants who were already struggling with affordability, and are now fighting to stay in business through the COVID crisis.

The area proposed for a new assessment district by New City America has had a long history of successful revitalization efforts led by community-based non-profits such as the aforementioned  El Cajon Boulevard BIA, The Hillcrest Business Association, along with the University Heights CDC, Mid-City Parking Community District and The North Park Maintenance Assessment District. These groups have poured countless hours of volunteer time, care and resources into the attraction of the area through community events, safer streets, infrastructure upgrades, maintenance, business recruitment and retention, and transit upgrades.

The undersigned growing list of community groups and stakeholders will resist the establishment of the proposed new district. It is in our estimation that a duplication of resources comes with a price tag that at this time would be better kept in the pockets of businesses, residents and property owners. Outside interference in a time of instability and crisis is unsettling. Our neighbors and members have expressed a sentiment of concern and would rather have us continue to focus on our current recovery missions rather than have our limited staff resources diverted into a campaign making the facts about this proposal known.

Please Email or call Councilmember Ward to voice your concern: