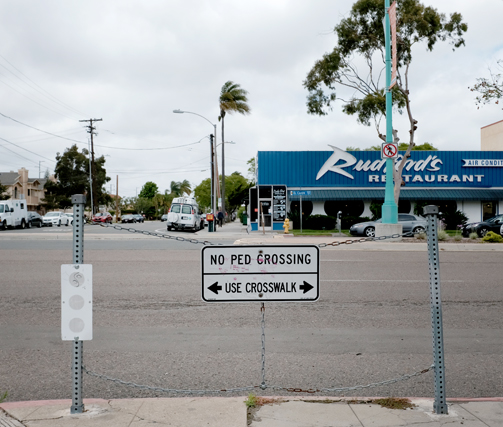 A major milestone has been passed in the association’s effort to create a two- phase pedestrian crossing on El Cajon Boulevard at Kansas St. With continued support from Mayor Kevin Faulconer, Councilmember Chris Ward, and Circulate SD, the design is funded and should be getting started this Summer.

The project started in 2014 when the Mid-City Community Parking District selected local firm KTU+A to create the West End Traffic Calming, Walkability and Parking Study. After examining accident data and feedback from the community, it was clear that safety improvements to wee needed to create of a more pedestrian friendly environment. A crossing at Kansas Street and El Cajon Boulevard was one of the projects that came out of the study that rose to the top of the list. Early efforts to establish the crossing were stymied by outdated city crossing standards.

The following February a celebration of Mr. Tura was held. Circulate SD joined by Councilmember Chris Ward, the El Cajon Boulevard Business Improvement Association, and friends and family members of Mr. Tura’s to celebrate his life and discuss how future tragedies at the same intersection can be prevented.

With continued support from the community, business leaders, Circulate SD and Councilmember Ward, the City’s engineers reevaluated the crossing and Mayor Faulconer’s office allocated funding for the project.

The design will likely take a year, with bid and award taking four months and then construction. The project is currently with Public Works. The details of the CIP project can be found here.