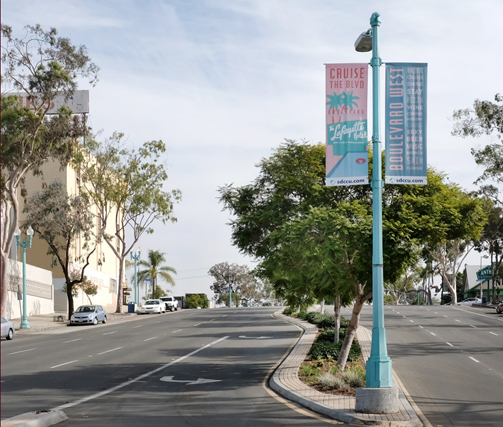 Beginning in the 1980s, with the construction of landscaped center medians and The Boulevard sign, the El Cajon Boulevard Business Improvement Association has been working to bring resources to The Boulevard. In partnership with other community non-profits and government groups, millions of dollars of improvements and maintenance have helped improve and brand The Boulevard. The North Park Maintenance Assessment District (MAD), a legal mechanism by which property owners voted to assess themselves to pay for and receive services above and beyond what the City normally provides in the areas of street lights, street cleaning and landscape maintenance. The North Park MAD was created in 1996 and was approved by a majority vote of property owners in 1998.  The El Cajon Boulevard BIA serves on the advisory committee, which is now under the North Park Planning Committee. The Parking Meter District Program was established in 1997. The program distributes a portion of the parking meter revenue to the district and the funds may be used to increase parking, mobility improvements (pedestrian and bicycling), valet parking, signage, landscaping, maintenance, and security.

The El Cajon Boulevard BID serves as the fiscal agent and administrator for the Mid-City Parking Meter District. Through the leadership at the ECBBIA, hundreds of new parking spaces have been added to the Mid-City area. Click here to learn more.