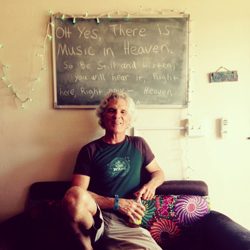 Who would have thought that the pioneer in introducing yoga to San Diego has been on El Cajon Boulevard since 1972!?! Aman (translates to tranquility), the owner of Full Circle yoga, explained the dynamic changes in yoga practice in San Diego over the last 43 years.

Aman worked at a bar in Las Vegas, and after practicing yoga for a year and half, he moved to San Diego in 1983, and took over the business from his half brother. According to Aman, Full Circle Yoga is the first yoga studio in San Diego. Despite his tranquility (no pun intended), he fought an uphill battle of sustaining the business. Initially, yoga was considered a “freak show.” He did many yoga demonstrations at local conventions to help overcome this perception, but a lack of understanding was a huge challenge in promoting the business. In addition, the business faced other issues related to the construction of I-15 freeway, which took over five years to complete. However, after years of construction, the freeway became a benefit, offering greater access to more people throughout the county.

Aman teaches and practices a yoga style known as Iyengar yoga. This type of yoga takes the name from the B.K.S Iyengar, who refined his practice of yoga with the use of props, specific sequencing of the asanas (poses), and has spread this art throughout the world. B.K.S has been named one of the 100 most influential people in the world by Time Magazine. Aman had the experience of getting to know this amazing teacher by taking workshops at his yoga institute in Pune, India. Aman described Iyengar as a teacher who paid full attention to every detail of his student’s body movements and poses, even with hundreds of students in a session.

As the practice of yoga became more mainstream, Aman and his wife Sunny’s business greatly benefitted. In sticking with their core values, Full Circle welcomes anybody that has the drive to further their practice of yoga through the Iyengar style of teaching, which they believe provides a much deeper connection to the mind and body than most yoga studios provide. Aman and Sunny are dedicated to also helping those who are injured achieve their fitness and strengthening goals by offering each of his student’s specialized yoga exercises catered to the individual, and by paying close attention to his student’s emotional and physical well-being.

The achievement that Full Circle Yoga seeks is for every individual to find a sense of balance through spirituality, not religioun, in connecting with one’s self. When asked how he promotes the business, Aman answered, “Keep practicing, love what you are doing, and people will follow.”