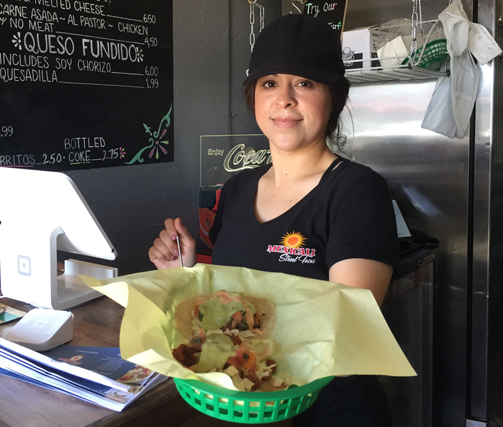 A Tradition of Deliciousness

In the 1970s, the Sotelo family and some family friends opened the first La Luz de Mundo Church in San Diego.  In just one year, they donated paychecks and sold homemade bread and tamales all over town to raise the money they needed to purchase a building in Barrio Logan.  This level of commitment and persistence was just the beginning for the Sotelos.  The hard-earned money that came from Liz’s Cocina (kitchen) during that time inspired several family restaurants and catering companies that carry on today.

Through trial and error, they opened their first restaurant in Point Loma.  Their kids were involved in the business from day one, where right after school they would take the bus across town to work the night shift.  With less time for fun and friends, their parents instilled in them the ethics of hard work and the rewards that come with it.  Over time, the business changed locations, settling in various venues up and down El Cajon Blvd.

Their youngest daughter Eva settled in Georgia, but she never lost touch with her passion for cooking and family traditions.  Over the years, she navigated from one job to the next until she came back around to cooking at her church.  With the inheritance that came from her father’s death, she realized it was time to start her own restaurant.

The Sotelo family is originally from Mexicali, where a unique pride for street food tacos is centered around the homemade flour tortillas and vast array of salsas.   Not too long ago, Eva’s brother Ishmael opened a Mexicali Taco spot on The Boulevard.  It was delicious, but his business model didn’t work out.  Then years later, another Mexicali Taco restaurant opened on The Boulevard, just east of the 805.  Low and behold, the Sotelo family struck again.  Eva moved back to San Diego to open her dream restaurant.  In a small kitchen space with window seating, Eva did a lovely job of upgrading the restaurant that her mother still caters out of into the new home of Tacos de Mexicali.

Over the years, she collected a number of her mother’s best recipes, but in order to really prepare herself for this endeavor, she needed to learn how to make homemade tortillas.  YouTube came in handy, but it was through trial and error and lots of love that she nailed it.  She admits that she made some mistakes along the way, but she is proud of herself for sticking with it and even happier when she witnesses the joy from customers once they try her food.

For a taste of legit Mexicali cuisine, make sure to order a taco on a homemade tortilla, but don’t stop there.  Mexicali is also known for their mulitas, which Eva describes as a Mexican hamburger, with all the fixings of a taco and melted cheese between two homemade tortillas.   They also serve Papas Rellenas, another Mexicali favorite, which consist of grilled potatoes stuffed with a hefty amount of delicious toppings.

Doesn’t this make you want to get your taco fix on?  To showcase all the great taco shops (including Mexicali Street Tacos) and support local business activity on The Boulevard, the El Cajon Boulevard BIA launched a self-guided Blvd Taco Tour with recommendations of what each place specializes in, so get out there and tour The Blvd’s taco scene.

Explore El Cajon Boulevard vía 16 different restaurants with two self-guided walking food tours guaranteed to deliver a fun day exploring the area on foot. You can count on a full afternoon of eating well with the Little Saigon Self-Guided Food Crawl and The Blvd Taco Tour. Try 10 different delicious and authentic Vietnamese food restaurants with the Little Saigon Food Crawl. The Blvd Taco Tour offers 6 different Mexican & Latin restaurants, each with a recommended taco certain to satisfy the foodie in you. To experience a culture, one must experience their cuisine and both tours are sure to do just that. Throw on your walking shoes, grab your friends and get to eating. Good food awaits!

Join us for a FREE, monthly vegan market at the soon-to-be The Village by Natural Delights parking lot at 2611 El Cajon Blvd in San Diego! Every first Friday of the month from 6pm – 10pm, we’ll be celebrating the vegan lifestyle with all-vegan eats, sweets, drinks, goods, and music!

“Mexican comfort food at its finest. The lamb meats is cooked to perfect, so damn tender. Add some rice, beans, tortillas and salsa for your choosing….and it’s pure heaven. Also, the stuffed quesadillas are fantastic. Especially the huitlacoche one. Mmmmmmmm! And the ladies that run this joint are so kind and welcoming, that it only makes you want to come back over and over again.”