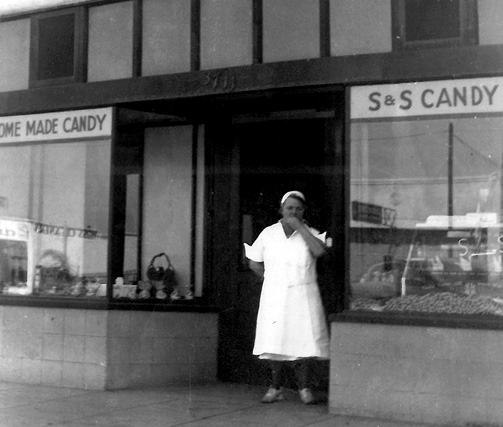 At the 1933 Chicago World’s Fair, Dominick Selerno and step-son Earl F. Smith of S&S Candy were set-up inside the German Village, selling a delicious range of handmade chocolates, including what they believe to be the first ever chocolate pretzels.  Over the course of this festive year, Earl met his future wife, Mary Maxine Oswald Smith, who was serving beer in the beer hall.  Once the fair came to an end, S&S Candy picked up their supplies and moved to San Diego to showcase their company at 1935 Panama Exposition in Balboa Park.

With their early success, along with San Diego’s undeniable perfect weather, they decided not to return to Chicago, and instead opened up a shop just one year later at 37th and El Cajon Boulevard.    They soon became wholesalers for Knott’s Berry Farm and other big outlets, generating large quantities of fine chocolates, their noted candy apples, peanut brittle, popcorn balls and roasted nuts.  Holiday specialty’s, such as hand formed candy canes, personalized Easter eggs, long stemmed Irish candy pipes for St. Patrick’s Day were well received by customers.  Earl and Mary’s two daughters, Norene and Nancy have fond memories of working in the shop in preparation for the big holiday orders. As the business flourished, they were in need of a larger outlet to meet their demands, and soon opened up shop at El Cajon Ave and Park Blvd. and then later  across the street from Hoover High School, at 4487 El Cajon Boulevard.  At this location, the family installed an animated neon sign on the roof of this location, which showed a candy maker and caramel candies moving from a candy caldron to a box.  It was one of the highlights of the era, amongst the other great neon signs on The Boulevard.

When WWII hit, the US began rationing supplies, so there was a shortage on sugar.  As a well-established business, S&S Candy pursued a business contract with the Navy.  In exchange for sugar, S&S sold candy to the Navy, which enabled them to keep their business up and running during the war years.  Norene and Nancy, who still carry the legacy of their family’s business, are very proud of the company’s ability to contract with such large agencies as the Navy, and serve the country during the war.

When Norene and Nancy’s father was diagnosed with MS, the business closed down soon thereafter.  The recipes were sold to Knott’s Berry Farm along with some personalized trainings.  Unfortunately, the children only played a support role in the company, and never took part in learning the process of making chocolate nor maintaining records of company recipes.  Still, the legacy of S&S Candy Co is present, passed along through treasured stories of a family-owned business, working together in the candy shop, supporting the community and building a foundation in San Diego, which remains a historical element of The Boulevard’s economic development.