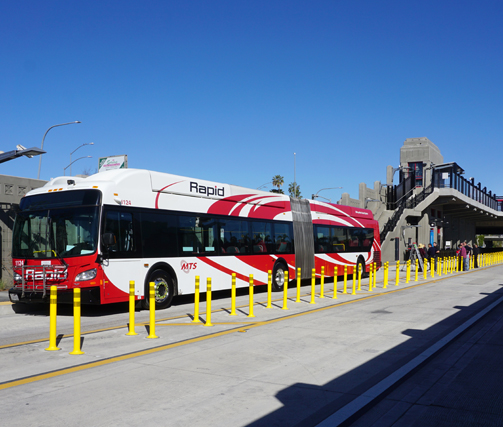 It’s the first project of its kind in the region: San Diego is now home to a new form of mass transportation.

It’s called the “235 Rapid” and it’s made up of freeway-level transit stations. The buses have their very own lane in the middle of the freeway and can make stops easily along the route.

The Rapid mainly serves areas along Interstate 15, starting in Escondido and ending downtown. The form of transit is designed to provide quick north-south connections.

The project was a labor of love for the people involved, taking 20 years to complete. On Saturday, the San Diego Association of Governments and Caltrans celebrated its unveiling in City Heights, at a transit station at El Cajon Boulevard and I-15. “It’s critical. As our population grows in San Diego County, it’s all about moving more people efficiently and we can’t just simply build out of congestion, so we have to get people out of their cars and into these buses,” said Andrew Rice, Project Manager with Caltrans.

The Rapid route from Escondido to downtown San Diego will start taking travelers at the beginning of March. One-way tickets cost $2.50 per person.

Another route, very similar, is currently under construction in the South Bay. That route will carry passengers from the Otay Mesa Port of Entry through eastern Chula Vista, and then to downtown San Diego.

Fresh off this weekend’s Tết Festival to mark Vietnamese New Year, the region’s Little Saigon quarter has another reason to celebrate. A newly painted mural now welcomes you to the six-block section in San Diego’s City Heights neighborhood.

The installation comes amid other efforts to shine a light on the area, which was designated as a community and cultural district by the city of San Diego in 2013.

The mural is one of several “vintage large-letter postcard-inspired murals” painted in states across the U.S. and one of three in San Diego, said traveling artist Victor Ving. “I guess what we do in a sense is a little bit more public art in a truer sense — it’s not just creating our art in public, we’re actually working with communities, incorporating elements from different neighborhoods into the pieces that we do,” Ving said.

The piece marks the launch of a larger public art project that aims to install more artistic works in the area that are inspired by stories from the community. Speak City Heights partners The AjA Project and Media Arts Center San Diego are also working on the initiative with the Little Saigon Foundation and the El Cajon Boulevard Business Improvement Association.

A news release about the project said, “Through the Creative California Communities Grant from the California Arts Council that the San Diego Art Institute received, they will be curating and installing site-specific artworks including murals, sculpture, light boxes and other mediums – all created by local artists.”

At the state level, Assemblyman Todd Gloria is also pushing to bolster the Little Saigon brand. The first-term representative and former San Diego City Councilman proposed a bill this month to install highway exits for the cultural district.

The mural completed earlier this month is located at the corner of Menlo Avenue and El Cajon Boulevard. Salsa, Cumbia and Bachata were a hit all summer long at the Fair@44.  Thanks to our partners at Melomano Entertainment and Dance who remain committed to providing a FREE event that brings together local community members and dance enthusiasts alike, Salsa Sabado will remain as a signature event of Fair@44 year round.

The next event is on Saturday, March 10! This is a FREE event.  Bring your FAMILY, bring your FRIENDS, and Let’s Dance!!