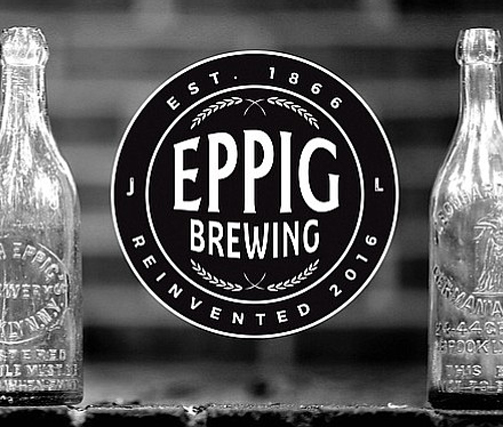 For a brand new start-up brewery on the Boulevard, Eppig Brewing has an epic history.  Great-great grandpa Henry Eppig and his two brothers emigrated from Germany to New York in the 1800’s.  In that period, New York was the capital of beer.  As young men, they learned the trade of brewing and by 1866, they opened their family brewery in a beautiful brick building in Brooklyn.  During Prohibition they went underground and reincorporated as a cereal company while selling their beer on the black market.

Unfortunately, they never recovered from that era, that is until, over 100 years later, when Henry’s great-great granddaughter Stephanie and her husband Todd recognized this family’s treasure as a viable business opportunity for them to ‘reinvent’ in their home town of San Diego, which is now America’s beer capital.

In order to make this happen, they reached out to friends, and friends of friends until they connected with a pair of great brewers who formally worked for Ballast Point.  In terms of a location, they scoured the town until they came upon an open call for a Brewery Igniter project on the North Park section of El Cajon Boulevard.  As one can imagine, launching a new microbrewery is expensive and involves a level of risk some investors shy away from. Inside the Brewery Igniter, developed by H.G. Fenton, all of the equipment and space needed to launch a microbrewery is made available, reducing startup cost and expediting the path to profitability. In addition, all Brewery Igniter units come with a tasting room and plenty of space for thirsty customers.

Located in the heart of North Park’s craft beer scene at 3052 El Cajon Boulevard, the Brewery Igniter is now home to three exciting brewers.  Alongside Eppig Brewing, which opened first, featuring a modern take on a historic family brewing tradition; San Diego Brewing Company, established in 1993, was interested in expanding production. Within a few months, Pariah Brewing Company, the creation of experienced local brewmaster Brian Mitchell, opened their doors too.

As we know, San Diegans love craft beer, and locals appreciate having another unique place to gather, making the overall move into the neighborhood seamless. With a couple of great neighbors side by side, Eppig Brewing is certainly providing a new sense of community on The Boulevard, one that is transported through time, and serves as reminder that our country’s history and love for craft beer goes far beyond ‘America’s Finest City’. The 2nd monthly Music Mob, presented in partnership by the El Cajon Boulevard BIA and Gig Town will provide a great line-up of live musicians at the BLVD West’s brunch time venues. From 10 – 2pm, locals are encouraged to peruse the Boulevard while enjoying a lazy Sunday, full of great dining options and drink specials, accompanied by live music sets at these four fabulous businesses.

Yelper: Super-cool shop with a great selection of new, hand-shaped boards by master local shapers including Larry Mabile, Hank Byzak and many others, plus some used boards.  Lots of nice logs, fishes, mid-lengths etc.  Mark is extremely friendly and knowledgeable and his shop is all about the craft of hand-shaping. Check it out!

Written by Angela Noble, Talmadge Resident
Situated between the new Copley-Price Family YMCA and the CVS on El Cajon Boulevard between Fairmount Avenue and 44th Street is a vacant lot, temporarily being rented by Fair@44 and, north toward Meade Avenue, a construction company.This site sits at the intersection of Kensington, Talmadge, and City Heights — three very different communities with different needs and often opposing development ideas.About a year ago Price Charities, who brought us the YMCA and countless other development projects around the City Heights area, introduced architect Rob Quigley and told us they were working on plans for the vacant lot. (By us, I refer to the KTPG meetings which are open to the public to attend.)For those of you who don’t know Rob Quigley, get to know him. He designed the Public Library downtown and lives in a home and office he designed that would be the envy of Batman himself.

When I first heard Rob Quigley would be designing what was to be built in, practically, my back yard, I was overjoyed. I first heard Quigley give a lecture at the AIGA San Diego Y Design Conference a few years back. After listening to him speak about the intentionality that he pours into every civic project, namely the library, I was convinced being an architect must be one of the highest professional callings — at least to make a lasting civic impact.

Last Wednesday, February 22nd, I had the pleasure of seeing the preliminary drawings and hearing the plans Price Charities and Rob Quigley have been dreaming up. The same intentionality and thought for the less-privileged side of the community he spoke of as he designed the library was all there.

Here are the highlights:

• A civic use space in the front portion of the lot adjacent to El Cajon Boulevard. The footprint of the building nearly half what it could be in favor of park-like space surrounding the building.

• An open lot space separating the front development from the back that could be used as a marketplace, much like fair@44 has been piloting.

• The back/north side development a mix of senior housing and general residential – both affordable and market rate. 195 2-3 bedroom units on floors 2-6, with first floor available for commercial space.

• Residential townhome-type buildings with much smaller footprints are utilized along 44th Street to mirror the existing residential buildings on the east side of the street.

• Rooftop green space is being considered. In late February the Small Business Development Center held their ribbon cutting ceremony for their new office in San Diego’s Center for Business Advancement. The ceremony touted success stories of the SBDC helping to make the vision of ambitious entrepreneurs a reality. The SBDC has partnered with the El Cajon Blvd BIA and Civic San Diego to work more conveniently with aspiring and current Boulevard businesses, by hosting workshops and advising sessions locally, at the BIA office. They will help our aspiring and existing businesses on the Boulevard qualify and secure lending, so they are able to move forward with their projects.

In addition to offering lending support, the SBDC offers 1:1 advisor sessions, where entrepreneurs are offered support in articulating their goals and execute a business plan to make them possible. The best part is, the services provided are free. The SBDC is a non-profit, funded by Southwestern Community College, with the aim of achieving economic success for communities here in San Diego, starting with the success of small businesses like those here on The Boulevard. We encourage any current or aspiring Boulevard business owners to come and take advantage of this opportunity. The more participation, the more of an appeal the Boulevard will have to greater San Diego as a destination for small, innovative businesses. Please contact us for more information on upcoming workshops and information sessions. E: Blvdresource@gmail.com P: 619-283-3608