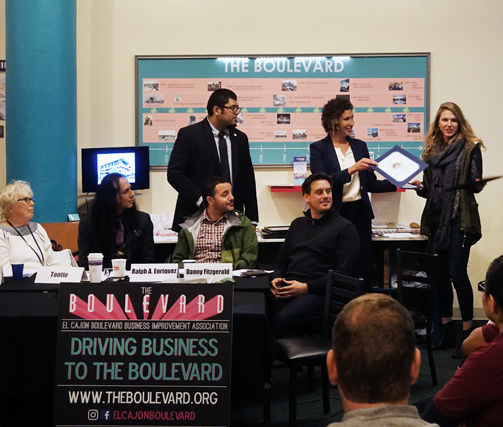 The El Cajon Boulevard Business Improvement Association held it’s Annual Corporate Meeting on January 19th, 2017. Business members, partner community groups, residents and political representatives attended to hear about accomplishments in 2016 and the next steps going forward. Councilmember Chris Ward was in attendance and congratulated the organization on the work that has done so far and expressed his commitment to help move the work forward.

A year in review presentation was given, and can be found here: Annual Meeting Presentation Awards were given to a number of Boulevard businesses and partners, including Michael Lengyel from Civic San Diego. Board elections were held and Ralph Enriquez (Attorney at Law) and Julie Tran (Goodbody Mortuary) have joined the board of directors. Gary Weber, the land-use consultant and longtime advocate for the organization has retired. President Emeritus, Jackie O’Connor, gave a heartfelt talk about all that Gary has done for the organization and the community as a whole. From the “The Boulevard” sign, to the medians, to the long list of programs he helped establish, Gary’s work has made an incredible impact in San Diego.  Although his official capacity is ending, Weber promised to continue to cause trouble as a Normal Heights resident.